A common misconception among the majority of golfers is that hybrid clubs are ready-made replacements for golf irons. Although there is an argument that this is true it is far too simplistic to state that the hybrid 5 is the same as a 5 iron as there are many differences between them. While accepting there are differences, is it possible to set a 5 hybrid vs 5 iron challenge to see which is the better club to choose? It sure is. Let’s get this comparison started!

Looking for a club? Check the best rated 5 hybrids here

5 Hybrid vs 5 Iron: Differences Between Them

For years the majority of golfers have had difficulty with striking the ball cleanly when using low irons. The 5 iron has been around for a number of years and is commonly seen as a mid-range club.

The average golfer will hit the 5 iron around 160 yards but professional male players will strike the ball nearer 200 yards with their 5 iron.

Hybrid clubs have only become available since 2002 and they appeared as a result of the difficulties golfers were having with both their long and mid-range irons.

The 5 hybrid will travel as far as the 5 iron but due to a number of different factors, the flight of the ball will be entirely different.

The standard length of the 5 iron is between 37.5 and 38 inches. This is different to the 5 hybrid which is between 40 and 42 inches in length.

Some players feel more comfortable swinging a longer shaft while others are more at home with the shorter shaft.

The 5 iron is a standard iron shape. The only time there will be varieties is when a player chooses to use the “blade type” irons which are sleeker and slimmer in shape.

They are only used by the most capable golfers as they have a smaller sweet spot, which while giving the player the opportunity to produce highly skilled shots, there is more room for error.

The club head of the 5 hybrid is fairly typical of all hybrid clubs with it looking like a large iron. This gives it a centre of gravity at the front of the club resulting in greater reliability.

However, as a result of the club head and length of the shaft, the ball will travel higher when hit by a 5 hybrid.

For the average player, the 5 hybrid gives the golfer a more reliable strike. However, this is offset by the 5 iron being a more flexible club where the ball can be played with either fade or draw.

When To Use 5 Hybrid and When 5 Iron

It is clear that the 5 hybrid will give the average golfer a greater chance of achieving a good score, especially in testing conditions.

The one problem the club may have would be in a strong wind. With the natural ball flight being higher the problem would be the player losing control of the flight of the ball.

The use of the 5 iron in strong winds would result in the ball traveling lower and therefore below the strongest gusts.

The top players are able to move the ball in the air from side to side when using the 5 iron. Although they can do this to some extent with the 5 hybrid they cannot do so with the same control and precision 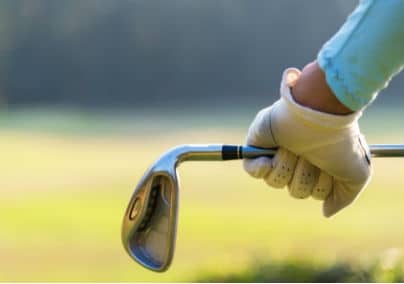 At the start of this article, I stated that hybrids were not ready made replacements for golf irons.

This is certainly the case but what is also true is that many golfers have benefited from using  a hybrid 5 instead of a 5 iron. It is too simplistic to state that one club is better in the 5 hybrid vs 5 iron argument.

Whatever players choose to use there are a number of fantastic clubs that are available to purchase. One of the best players of a 5 iron in world golf is Sergio Garcia and he uses Callaway irons.

While this may be a popular choice among the elite players many golfers choose to use the hybrid alternative with few manufacturers being more popular than TaylorMade.

In the professional game, there are more ladies on both the LPGA and the LET who have enhanced their game with the use of the 5 hybrid.

They do not hit the ball as far as the men, yet the consistency of the ball strike has given them the opportunity to be in good scoring positions more regularly.

It is rare to find players who will carry the 5 hybrid and the 5 iron in the same golf bag. With the numbers of clubs being restricted to 14 they are just too similar in the distance to allow a golfer the luxury of having both at their disposal.

It is clear that golfers have to decide which club they prefer to carry. Golfers will often have access to both clubs and their final decision may result on the state of the course, the stage of the competition, or even how the golfer feels he or she has been swinging the club during the warm up.

There is no definite answer to the question of which club is better, it is just reassuring to know that the modern-day golfer has access to a wider variety of clubs than ever before.