Every golfer looks closely at this aspect of their game in order to record as low a completed round as possible. One particular aspect golfers will look at will be the type of putter they use and this may be the make of putter or even the design of it. The Mallet Putter is totally different from Blade Putter and we will be looking at their major differences, as we compare them. Mallet putters vs blade putters – let the battle begin!

Difference Between Mallet and Blade Putters

The Putter has been around for many years with many in the early days being similar in appearance to today’s Blade Putters in appearance.

In golfer’s desire to improve their putting as technology advanced so did the types of putters the players were using.

In 1991 a Mallet Putter called the “Rossey I” was produced by Oddysey Sports and it earned its first win on the PGA Tour.

The most obvious difference between the two putters is their contrasting appearance. The Blade Putter’s shape is totally different from the Mallet Putter.

The Blade Putter is more rectangular in appearance. This can change with make and model but is generally a compact design.

This contrasts with the Mallet Putter which has a flatter appearance with an extended rear end. The theory behind this is that it directs more weight away from the face of the club making it more stable

Generally, the shafts of both styles of Putter are pretty similar. The most important aspect is getting the length of the shaft correct with 35-inch shafts being suitable for players over 6 foot tall.

Players under that height benefit more from using a 34-inch length.

Both Putters are predominantly made of steel. Different companies play around with different combinations of metals but this won’t be determined by whether their product is a Blade or Mallet putter.

The weight of Blade Putters is distributed close to the face of the putter.

This is a result of it having a compact rectangular shape. The weight of the Blade Putter way from the face of it as a result of the extra mass being found at the back of the Putter.

Pros and Cons of Mallet Putters

Mallet Putters are suitable for players who have an up and downswing. The greater stability provided by the balance of the shape of the putter means that the extra reliability of the contact means that it will be ideal for this type of stroke.

However, some players prefer the arc swing and this putter does not give the golfer the flexibility that is needed to make the most of this Putting technique.

Pros and Cons of Blade Putters

Blade Putters are ideal for players with the arc swing. The rectangular shape means that the golfer can readjust their putting stroke to the length and speed of the putt. The player then can rely on their own touch as opposed to the weight of the putter’s head.

Blade Putters are not able to offer the same reliability with an up and downswing as the Mallet Putters. It takes a lot more natural ability and practice to match the results that will be obtained from using a Mallet Putter.

Blade or Mallet Putters: Which Style Putter is Best for Your Game?

The answer to the question is simply dependent on the swing you employ when putting.

Those who are up and down putters will be keen to purchase a Mallet Putter, while those who use an arc putting stroke will be more likely to be using a Blade Putter.

The ability of the golfer will have little bearing on the type of putter they are likely to use. One of the most famous Putter manufacturers in the world is Scotty Cameron with the company being made famous by the exploits of Tiger Woods, who used one of their Blade Putters.

Today the same company produces both Blade and Mallet Putters for some of the top PGA players.

In order for any golfer to ascertain which style of putter is most suitable for their needs they must first be able to identify which putting stroke they are employing.

Once this has been found then it is all about personal choice in picking one of the many models of putter that are now available. 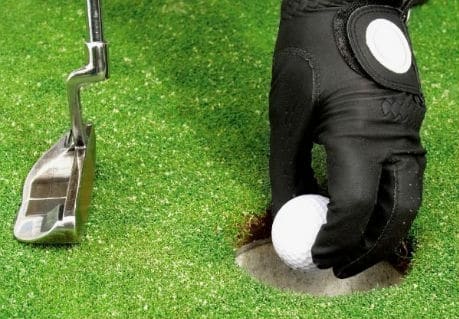 It is quite clear that it is simply impossible to decide between the Blade vs Mallet putter debate without knowing an individual’s putting stroke. However, once a player has the right putter in their bag only half the battle is won.

The top putters in world golf have only reached the top of their game from endless hours of practice.

It is great having the best equipment that modern technology can produce but putting is also about natural capability, an ability to read the undulations of each green, and also having nerves of steel.

In order for the world’s greatest golfers to have reached the pinnacle of their profession, they have also trained and practiced like champions.