Ball technology has come a long way in the last decade with one of the biggest developments being the ability for manufacturers to construct low-compression balls with extremely reactive cores. This gives players with moderate swing speeds a mixture of distance and feel for more control around the green. So is this too much to ask for in one ball? Let’s see how these two balls stack up against each other.

Srixon Soft Feel Vs Callaway Supersoft – which golf ball is better for your game? Both balls offer good distance and control, with improved softness and more control around the green, but overall the Srixon Soft Feel does everything a little bit better. Its longer and has a more penetrating ball flight that feels more responsive at impact. The Srixon also comes out on top on price making this decision even easier. Below we compare how these balls perform out on the course.

The Srixon Soft Feel is designed for golfers with medium to slow swing speeds who want to maximise distance without giving up feel around the green.

The new cover features an upgraded 338 dimple pattern that reduces drag for added distance and flight stabililsation. The EGG core promotes a high launch, low spin trajectory off the tee and a softer feeling skin for greenside play.

The  Callaway Supersoft  is their lowest compression ball ever, with a softer new cover which maintains the characteristic HEX dimple design, for lower drag and better control.

Designed for slower swing speeds it feels very lively off the tee and low spinning, but it is a very unique feel due to the compression so knowing your swing speed is important when choosing this ball.

Both balls are designed to reduce driver spin rates and are comparable in terms of numbers. In terms of feel, these two-piece balls couldn’t be more different off the driver face.

Even though they offer similar characteristics’ the Callaway Supersoft feels very springy and soft, whilst the Srixon Soft feel is more solid and responsive.

Both these 2 piece balls are designed to be long and get the job done in different ways due to different core engineering. The Srixon Soft Feel has an energetic gradient growth core, which basically means the ball becomes gradually firmer towards the perimeter maximizing ball speed.

The Callaway Super Soft has an ultra-low compression core for livelier ball speeds and an anti-drag ‘Hex’ dimple design. The Srixon is marginally longer from comparative mid-range swing speeds.

The ultra-low compression core of the Callaway Super Soft certainly feels more tactile around the greens, offering reassurance particularly on faster greens, but offers a comparative amount of greenside spin as the Srixon Soft Feel.

Srixon’s Soft Feel generates more spin on approach wedge and pitch shots without the ‘squishy’ feeling of the Callaway.

You can expect to play an impressive two full rounds with both these balls and have no major scuff marks or feathering, which is due to the outer shell skin technology.

Each year this continues to improve in strength, whilst getting thinner promoting better feel. It would be hard to separate these balls on longevity.

Due to the stabilizing aerodynamic dimple designs on both balls, the ability to work the ball in each direction is reduced in order to reduce drag causing left and right deviation.

The Srixon Soft Feel features a 338 Speed Dimple Pattern which reduces drag and has tested well in windy conditions.

The Callaway Super Soft has a redesigned hexagonal dimple pattern for improved low-spin aerodynamics off the tee and would be the straighter control ball between the two.

Both balls are in the same ‘mid-range ball’ price point, but the Callaway Super Soft is generally priced slightly more expensive. 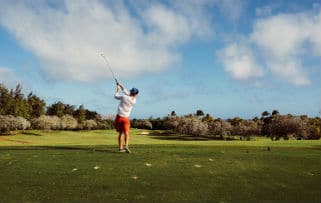 Srixon Soft Feel Vs Callaway Supersoft – and the winner is…

The Callaway’s very low compression feels less responsive with iron shots and has a higher ball flight, as opposed to a more penetrating flight from the Srixon Soft Feel.

In terms of budget, the Callaway is slightly more expensive, which actually puts in the next up in price range. It really suits a slower than average swing speed giving relative feedback on most shots due to a very low 38 compression.

Around the greens both balls have comparative grip with the only difference being a noticeably more tacky feeling with the Callaway Supersoft ball which is quite an unusual feeling off the face and takes some getting used to.