We hear about it all the time- the gender pay gap between men and women. The issue has become an area of increasing attention and with good reason. Is it fair for one person or group of persons to be given a different pay for doing the same job? In a perfect world, the short answer is: of course it isn’t.

Examine the situation with an added variable. What if, despite the fact that they are producing the same product, one group has a higher demand for their work?

Isn’t it fair that they earn a higher salary since there is a higher demand for their work?

That is the case in professional golf today. Professional female golfers are making significantly less money than their male counterparts and the reason is obvious.

Less people are watching female professional golf. This lower demand for women’s golf means less viewers (in person and television), which means less interest from advertisers, which leads to less money going to the sport.

This is in contrast to men’s golf which enjoys higher TV ratings and larger crowds at tournaments, which therefore attracts more advertisers who are willing to shell out bigger amounts of money to advertise their products. This also allows tournament promoters to put up larger prize winnings, resulting in the pay gap that exists.

If you want to take another step towards lowering your scores then you might want to invest in a rangefinder. It doesn’t have to break the bank – read our budget rangefinders article to see what are the best cheap rangefinders on the market.

Let me be clear in stating that this doesn’t mean that the athletes that make up the LPGA are not as talented or even incapable of hanging with the men. Anyone who is familiar with the game knows that brute strength and size, areas where men usually dominate, does not necessarily make you a better golfer.

Because golf is a game of precision and skill it may be one of the few sports where men and women’s stats are very similar.

In fact LPGA pro Stacy Lewis has stated that she believes women in the sport likely hit more greens in regulations and do a better job at finding the fairway.

This has been shown to be true when looking at the some of the top players from the PGA and comparing them to some of the ladies in the LPGA, further proving that it isn’t the quality of the game that is hurting women’s golf but the quality of viewership. 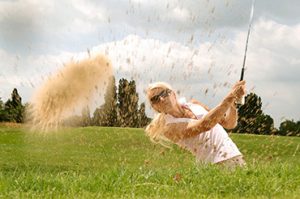 Where can changes be made to narrow this gap in pay?

That answer isn’t easy. Change has to come from fans and viewers, who are the customers in this instance.

We all know how difficult it can be to influence customers, after all if you have the ability to direct customers’ actions you potentially have the power to make a lot of money. Maybe the best way of attempting to do this would be putting the media’s spotlight on the sport with an emphasis on the characters and the stories that come along with the ladies tour.

It has certainly worked for countless other sports. Many documentaries have been made in the last few years that shine a spotlight on aspects of a sport or pro athletes’ lives that many viewers wouldn’t know existed if they weren’t shown which then creates more interest in the players’ career.

Why can’t the same be done for the athletes in the LPGA?

If you think this isn’t possible consider the case of professional wrestling which is a form of entertainment that is about ten percent athleticism and physical skill and ninety percent storyline.

Drama is what draws people in and keeps them coming back. Surely these kinds of storylines can be constructed without too much fictitious drive behind them. One example where major steps have already been taken in order narrow the pay gap is professional tennis.

Recent changes have been that resulted in the first time where the Wimbledon Championships awarded equal prize money to both the male and female winners.

Although the tournament is the oldest tennis tournament in the world it was the last of the four major tennis tournaments to make its prize winnings equal for men and women. Like golf, male tennis matches often bring I more spectators than female matches however if tennis has been able to take such significant steps towards equal pay why can’t golf do the same?

In the end, it really is the athletes and the LPGA’s duty to boost their popularity in order to create the kind of revenue necessary in order to close the pay gap.

The sport deserves the pay and it’s time for LPGA and its athletes to put in the appropriate work that is necessary in order to gain the following required for a big jump in winnings and salary.

Michael Jordan, Ronda Rousey, Tiger Woods and the Williams sisters all made people want to tune in to watch their sport because we knew something exciting was bound to happen when they were playing.

Women’s golf needs these types of athletes in order to reach the next level that we all know it’s capable of. It’s only a matter of time that the sport will get this and only then will the pay for its athletes finally be at a level that can be compared to their male counterparts.