To help you ease into the game, these drivers especially built for seniors with a swing speed 90-100 mph or slower have been reviewed and compared until only one gets chosen as the best. Ready? Let’s do it!

If you want to take another step towards lowering your scores then you might want to invest in a rangefinder. It doesn’t have to break the bank – read our budget rangefinders article to see what are the best affordable rangefinders on the market.

TaylorMade has been using aero design to produce a range of M drivers that are able to deliver fast swing speeds.

The best value is certainly the M2 which is now half the price of the latest models, the M5 and M6, providing just a great club for the older players.

TaylorMade have tried to replace the M2 with the M3, M4in 2018, M5 and M6 models. Despite their best efforts, they have been unable to take players with slower swing speeds away from their M2 drivers.

And it is still, after so many years, the best TaylorMade driver for seniors.

The acoustic technology of the club means that the ball can be hit a long distance and this can be achieved from a club that is one of the lightest in weight.

The senior golfer can choose between a 10.5 degree or 12 degree loft.

This driver is constructed from graphite.

This lightweight material means that the older golfer can get the highest swing speeds from the club which is also helped by its aerodynamic design.

Many senior golfers look for a club that can get a high ball flight.

The cup face design of the driver’s face means that the loft is enhanced and there are also a number of adjustable settings for the club.

Cobra is a company that has for years been producing compact and effective drivers.

The F9 Speedback driver is no exception and its high-end design and deep center of gravity give it the capability to achieve long distances despite its lightweight of 325 grams.

The weight fixed on the back of the club means that the quality of the strike is more reliable and less spin is transferred onto the ball resulting in a more direct flight path.

There is also an offset feature to the club which minimizes the chances of hitting a hook or a slice.

The D300 driver is a product of Wilson using high end “Re Akt” Technology to get the most out of a very light club.

They have used dynamic launch control to position weights within the head of the club to achieve maximum distance.

The composite crown of the club has a layer of vibration absorbing kevlar which adds a smoothness and speed to the senior golfer’s swing.

This enables many older golfers to get their swing above 85 mph.

You may also like: Callaway Supersoft vs Titleist Pro V1 (the result will surprise you)

This club looks the real deal with its sleek design.

It is also well priced and is as light as any club on the market enabling mature golfers to achieve high swing speeds.

The club provides the sweetest contact for those players who tend to strike the ball at the end, or the toe, of the club face.

This light club also provides good value as it is not the most expensive on the market.

What Should Seniors and Older Players Look Out for When Buying a Driver?

As most seniors and older players of golf have slower swing speeds compared to golfers below 50, you would want to consider the following when going out shopping for a driver.

Quite simply the lighter the club the more chance a senior will have in swinging it beyond 100 mph.

Driver shafts are made out of either graphite or steel.

Driver shafts have five flex grades, one of which is A that stands for senior (though it should be noted here that A used to stand for amateur which has since become obsolete).

In golf parlance, the loft of a club refers to the angle formed between its shaft and face.

You may also like: Ping G vs. Taylormade M2 Driver and TaylorMade M2 vs Callaway GBB Epic Driver comparison & review. 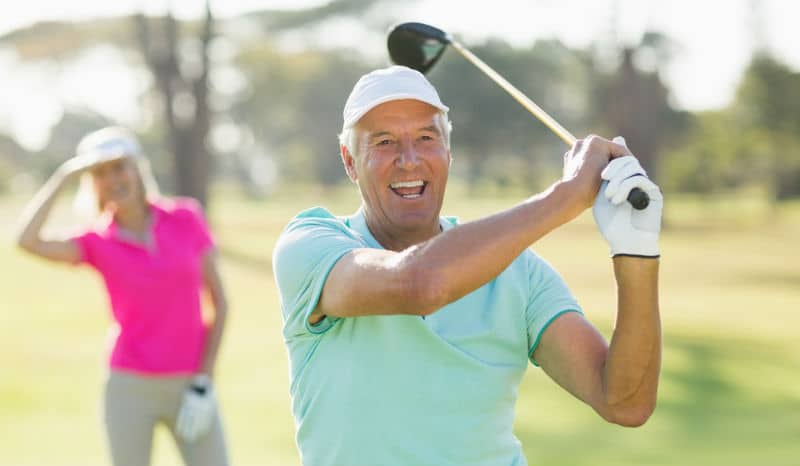 The driver is nearly always the first shot on every hole in golf so it is important that the senior golfer picks a suitable driver as it sets the standard for the rest of the hole, and even the ground.

The good news for the seniors is that the golf club manufacturers are investing vast sums of money in providing drivers specifically for the older generation.

They have a bigger market among older golfers than they do among the younger players.

The more mature players generally have more disposable income to spend and their years of playing contact sports has gone. Golf is perfect for them and those in their pension years have plenty of time on their hands to play the game.

The amount of new clubs appearing is frightening and some are quickly replaced. Cleveland for example in 2019 used the Launcher HB driver but in 2020 they have moved on to the Launcher Turbo HB driver.

The best driver for the older players is the TaylorMade M2. Since 2017 they have introduced the M3, M4 and M5, yet despite their best efforts none of these models have become more popular than the M2 and this club is still leading the way in the best driver for senior golfers.

Other great options for seniors in 2019 and 2020 are the Cleveland Launcher Turbo HB driver, the Cobra F9 Speedback driver, and the Wilson D300.